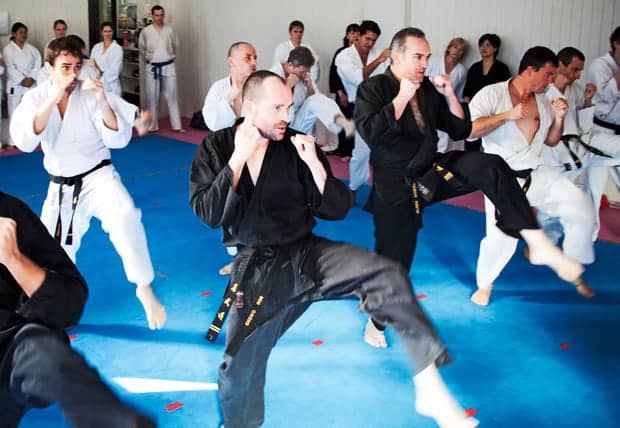 Karate is probably the most well known of all martial arts. It’s methods are enjoyed by adults and children of all ages. Karate was Born in the islands of Okinawa and later developed and refined in Japan. The generic word of Karate eventually spread though out the world as a representive of all oriental martial arts.

Though all schools of karate are fighting systems that use the hands and feet, elbows and knees as weapons, since it’s beginning different styles and karate classes have developed. One of the oldest styles of Karate is Shotokan Karate. Based on ancient principles it is probably the most famous and well known of the karate schools. Goju Ryu is another very famous style of Karate.

Most Karate schools have kata ( Set patterns), self defence and sparring in the syllabus and use the belt system, starting at white and working towards black.

Karate classes are quite popular in Australia and there are many styles, associations and schools in Sydney. Most have affiliations with Japan. The Australian Karate Federation is the main association for information on the various schools.

Karate will give you great basics and good self defense skills. The training is quite traditional and the use of Japanese terminology is common. The karate class is quite physical with fitness and conditioning being a great byproduct of the training.

The founder of Northstar; Andy Dickinson has no formal qualifications in karate but has trained with many karate instructors. Many of the karate moves resemble moves from other martial arts that are incorporated into the Northstar System.

If you’re looking for a martial art that incorporates the best elements of karate in Sydney just fill in your details in the inquiry box and you can come to a class for free to see for yourself.