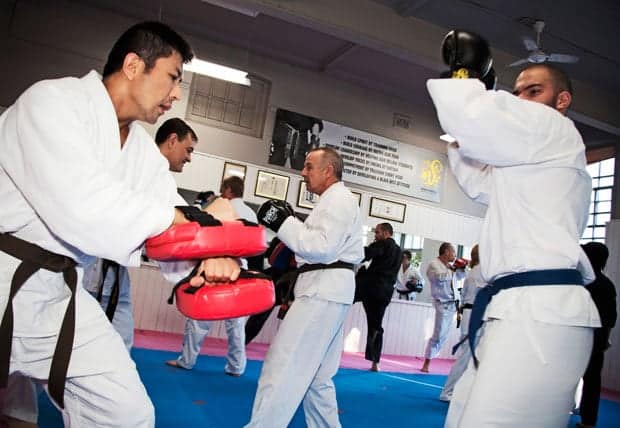 From the traditions of Karate, Tatsuo Yamada, became interested in the full contact applications of karate after seeing Thais perform Muay Thai boxing in the ring. The main moves of kick boxing can be traced back to the original full contact karate styles such as kyokushin. In the beginning , kickboxing allowed head butts and throws which clearly separated it from Thai boxing. These were removed as the rules evolved. The first kickboxing association was formed in 1966 by Japanese Osamu Noguchi. The first ever kickboxing event was held in Japan in 1966.

In the USA, karate was being modified into full contact ring fights as early as the mid 60’s, but it was not until the mid 70’s that proper sanctioned organisations were formed to cope with the new popular sport of kick boxing.
Since that time, kickboxing has spread world wide and has evolved into many associations with many variations on the rules.

Kickboxing is a great form of martial arts in it’s own right. It has modernized the traditional side of the art and transformed karate into a simple yet robust and effective form of sport fighting that can also be used for self defence. Though the traditionalists may contend that it does not resemble a martial arts as there is no etiquette and connection to a lineage…and in a way that is true.

The by products of kickboxing training are terrific. They include; weight loss and conditioning. As the fighters need to be in great shape the training included drills, bag work, skipping and sparring.

These days many gyms include white collar kickboxing for men and women. So they enjoy the robust training with out the contact. Many personal trainers can be seen in parks training clients on the pads and there are many kickboxing accreditation programs that fitness industry recognizes.

At Northstar we incorporate many kick box moves into the standard syllabus for enjoyment, self defence and fitness.

If you’re searching for kickboxing classes Sydney, Northstar incorporates the best elements of the style with other forms of Martial Arts. Just fill in your details in the inquiry box and you can come to a class for free to see for yourself.