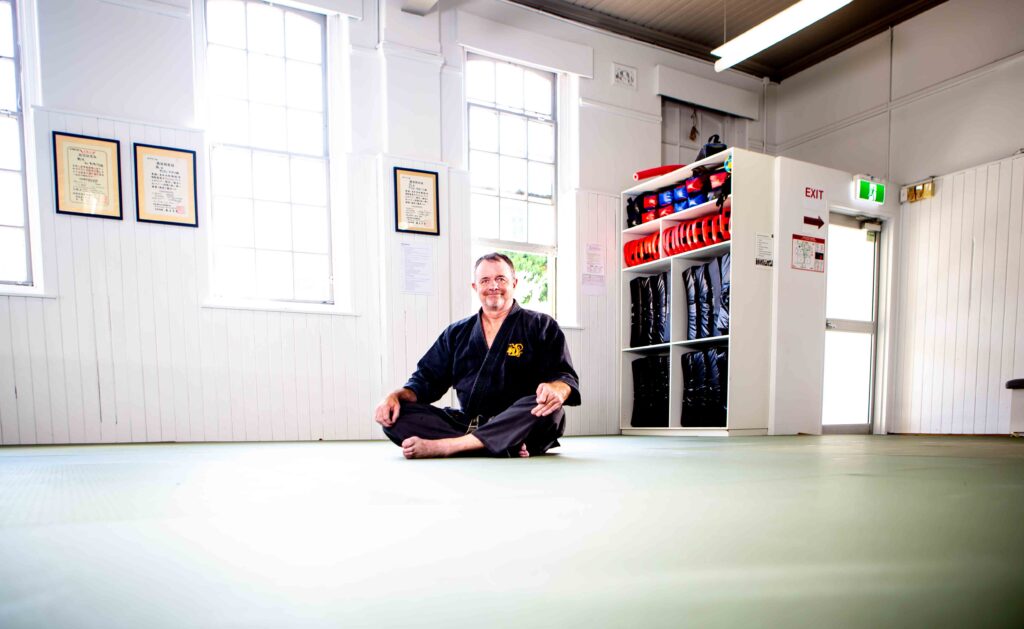 To make your dojo look and feel special, the following qualities will help. These are unique to Northstar Ju Jitsu. Every dojo is different.

Zanshin is an intense awareness. It includes awareness that you exist, you exist in a space around you, that you can control, awareness of the other, and their space, all at the same time, without thinking about it. We start to train ourselves in this,  the moment we enter the dojo and aim to maintain this open sense of awareness through-out the entire class. A constant reminder is in every ready stance, to come back to the present moment.

The ready stance is just a metaphor. As we do it, become still and aware emotionally of what we are going through, what exactly is happening. Your fight or flight is highly tuned, you must decide. But first you need to be able to see the choices. That may mean, you raise your open hands like in a fighting stance, but you do not close your fists, you want to appear neutral and not aggressive or angry. Having your hands up will ensure your safety in a fiery, out of control situation. If you are aware of your choices, you can move very quickly with clarity and purpose once the decision is made.

The greatest General Julius Caesar, after spending many years defeating the Gaul’s in what is now greater Europe, he had amassed a huge and powerful army. At Rome, the senate fuelled by Cicero and other Roman power brokers, feared that Caesar with his army would march on and take control of Rome. So even after his great victory over Gaul for Rome, he was declared an out-law.

This infuriated the great Caesar, so with his army he set off for Rome. The point of no return for Caesar was the Rubicon River. Once he crossed it, he was certain that a war with Rome would follow. So, in combat, you must decide whether you will cross your own Rubicon. That is, taking a risk and crossing the distance between you and your opponent and remaining in range whilst you unleash your techniques. This is working in the pocket.

I have studied the ancient Hindu Vedantic tradition. With in the age-old teachings there are many timeless gems that are still very relevant today. The Bhagavat Gita and the Upanishads are like the Hindu bible and are packed with many wise lessons. I like to use some of the lessons in the foundation study of Northstar Ju Jitsu. The mahaguna are often gently referred to in my teachings.

All 3 of the mahaguna are present with in my dojo, constantly rotating. For the best mindful experience, the dojo needs to be sattwic at the beginning of class in order to be a place where you can learn and grow in your own way at your pace. No eating or loud talking. A clean, still and neutral space. The dojo goes through tamas and rajas during the class, then at the end of class, we finish with some softer techniques to bring us back down and leave the dojo and ourselves in Sattwa. All clutter and bags are removed or packed away. The dojo is cleaned, the pads are straightened, rubbish is removed from the shelves. It is returned to its original state.

When all of the above work together in unison, people that visit will just feel the special quality of the space. They may not be able to put their finger on what it is about the dojo. They pick it up on a subtle level, beyond their everyday thought. They just feel it in their body, mind and spirit.

Get direct access to my teaching. Check out my website and the Northstar Ju Jitsu online Academy now. https://www.northstarmartialarts.com.au/shop/