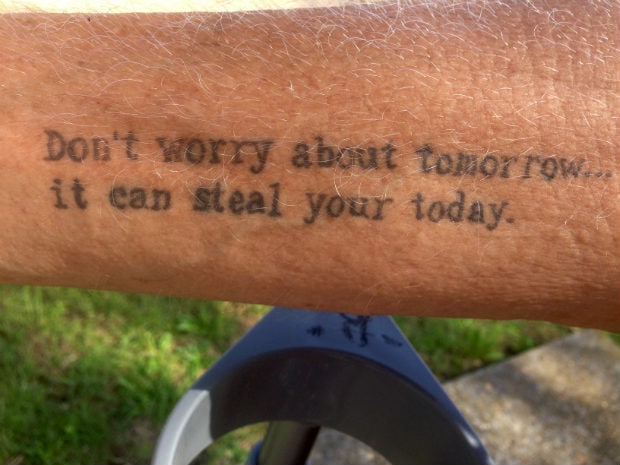 I was doing my power walk, hat on, sunnies and iPod firmly in place, totally obsessed with what is going on in my little world. All things that seem so important and cause worry.

I walked up a short hill and there he was. His walking stick had dropped off the park bench so I stopped and picked it up for him, slightly annoyed that my walk had been interrupted and my time would not be as fast as it should have. Yet I was drawn to this old man scrunched up on the park bench, trying to stand.

In a breath my world dropped away. As I helped him to stand up, I noticed a tattoo on his arm. “Oh that” he said, “I had that tattooed on after my second stint in palliative care for cancer. Last October the oncologist said there was nothing they could do for me and gave me a couple of weeks. Luckily a friend of mine got me on a trial for a new cancer treatment and it worked. But as far as the oncologist was concerned there was nothing that could be done. So here I am, I don’t know how long I have but everyday is a gift.”

I took a photo of the tattoo and Harry said, share it with as many people as you can, if it can help them then that makes me feel better.

I spent about 5 minutes bathing in Harry’s energy, his life force was strong and it touched me. Needless to say my only thoughts for the rest of the walk were how I wanted to share the photo with you.