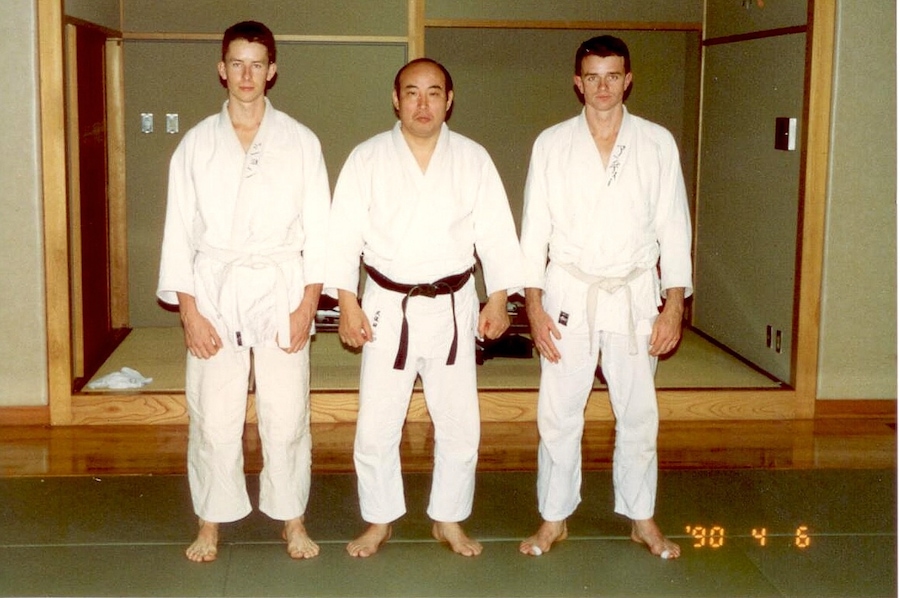 Both of these martial arts systems are great forms of martial arts and yes, they are related. Ju Jitsu originated in Japan.  The traditional martial arts of Ju Jitsu evolved in japan along 2 main lines. That which was designed and used on the battle fields, the empty hand techniques were a supplement to the use of weapons and not the focus. Systems such as yawara and tai-jutsu. These martial arts were specifically used by soldiers. Other forms of Ju Jitsu were also created by law enforcement for maintaining law and order.

These forms of Ju Jitsu were very effective, but the old ways of the sword evolved to have no place in a developing Japan. One of the most famous forms of Ju Jitsu was founded by Iso Maetomon. He studied both Muso Ryu and Shin no Shinto Ryu and founded Tenjin Shin-yo Ryu. Maetomon’s emphasis was on empty had (no weapons) techniques. Though he still maintained the original spirit of the old ju Jitsu schools, ensuring the fighting skills, realism and effectiveness were maintained.  Atemi; kicks, fists elbows and knees were a specialty of the exponents of Tenjin Shin-yo Ryu. He attracted many students to his dojo, but most were not military men, they used the term commoner.

By the end of the Edo period 1603-1868 and the beginning of the Meiji period there were more than 700 schools that were using Ju Jitsu techniques, mostly with-out weapons. These styles had evolved to become aesthetic in nature almost completely void of martial effectiveness.

Jigaro Kano, entered the Tenjin shin-yo school in 1877. His teacher was the current headmaster Hachinosuke, who was taught by the founder Maetomon. The training was quite severe and unlike many other forms of martial arts at the time, because of the striking training was still very effective. Upon the death of his teacher Kano joined the Kito Ryu in 1881. This school also lacked martial fibre, focusing on nage waza or throwing techniques. Ju Jitsu was slowly disappearing as Japan was trying to establish its identity in a fastly developing world. The few experts that remained struggled to gain students and recognition. Kano resolved to re-establish Ju Jitsu back to a legitimate national pastime worthy of the Meiji era and its ancient reputation.

In 1882, Kano synthesized all his knowledge so far, including the Tenjin Shin-yo Ryu and Kito Ryu into what he called “Kodokan Judo” at the Eisho-ji, a temple in Tokyo, to 9 students. The training of martial arts as a way to improve the body mind and spirit really appealed to Kano.  Ju Jitsu by comparison used many moves that were quite violent and regularly injured the participants. This caused Ju Jitsu to be looked upon as a rough and somewhat uncouth form of training, so Kano preferred to not be aligned with name Ju Jitsu.

In 1886, Kano accepted the now famous challenge from the Yoshin Ryu Ju Jitsu, organised by the Tokyo Police. 15 fighters from each school were pitted against each other. The Judo team won all, but 2 bouts and the Yoshin Ryu team were decimated by the Kodokan’s Saigo Shiro’s masterful use of Yama Arashi. It is not well known that Yama Arashi was a Daito Ryu Aiki Ju Jitsu technique that he had learned previously.

Kano was emphatic in the inclusion of kata (pre-arranged fighting moves) into all the structures of training. He believed that the training in kata not only improved the physical conditioning of the body but also stimulated the intellectual development.  Kano considered that the personal character of all his students was the real test of their values and required them to live their lives in a dignified manner. By his own outstanding example, Kano inspired all who came to the Kodokan. Judo has gone on to become an international and Olympic sport that has set the wheels in motion right from its humble beginning, an incredible movement known as modern martial arts.

The photo is with the late Head Master Kubota Sensei of Tenjin Shin yo Ryu.