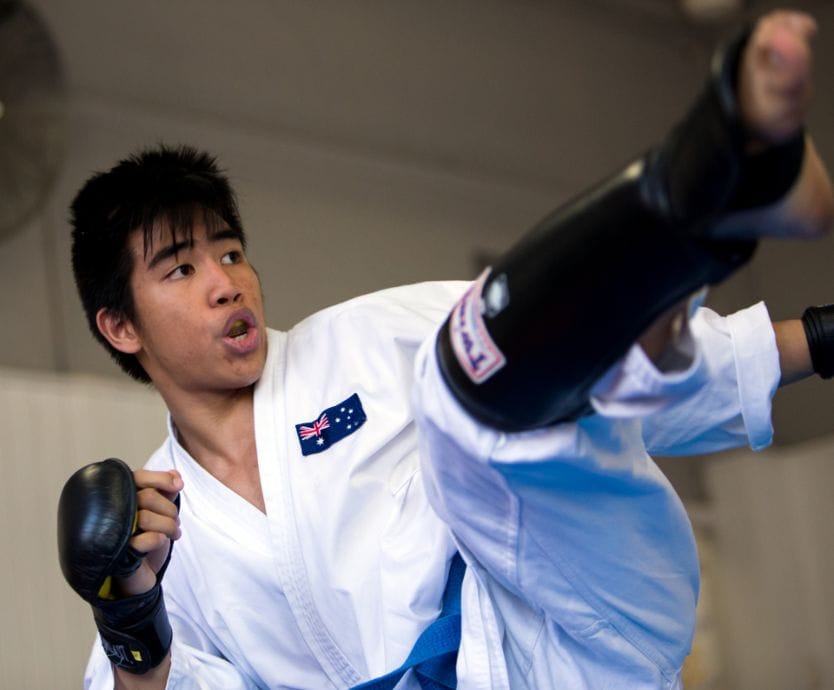 The age-old question; which is the tougher, more superior way of fighting? The only way to truly answer the question, one really has had to have experienced a lot as it really is not as clean cut as it seems. Trying to answer this question in broad terms would actually be a gross in justice to all forms of combat.

Some may simply dismiss the martial artist by saying that they hide behind their secret techniques and are high and mighty in their stand that “deadly techniques” are removed from sports competition there by giving them the air of ‘lethal weapon’ but discreetly never having to prove themselves. But who ever says that martial artists cannot hold their has never stepped into a proper martial arts dojo and asked to spar.

UFC may have seen resurgence in the now defunct argument that non-contact karateka and other forms of traditional martial arts are not worthy of their reputation. Judging an entire heritage and tradition on a handful of inexperienced fighters is for people that still argue that “my dad is bigger’ than your dad….and have never got over it.

There are many great fighters that are also martial artists. Some of my toughest sparring matches have been against traditional karate and taekwondo stylists, fast, efficient and brutal, well versed in all aspects of fighting.  Back in the late 80’s there was a league of martial arts that used to compete in teams every 3 weeks. This competition was in NSW, Vic and Qld. It was great fun and all the great martial arts competitors got into the spirit of the competition. Saturday afternoon was open sparring. This was not a place for the feint hearted. You knew you were going to have to fight and you knew it was hurt or be hurt. Some days there were 30-40 black belts from all styles, and I respected all that stepped onto the mat.  By contrast the average street fighter is a thug that will king hit you when you look the other way…I know, there are no rules on the street, but the street fighter (if there is such a thing these days) is usually an undisciplined, out of control brawler that will turn and run the moment he is on the losing side of a scrap.

Fighting and sparring other highly trained Black Belts is a very dangerous pastime. One false slip, one over extension and you can be badly hurt, knocked out or killed. Training and sparring the likes of Adam Watt, Colin Handley, John Rhodes, Marty Doyle, Tom Lilovac, Todd Pallet, Scott Brown, Nick Stone or Rob Mataic, you are up against years of training and incredibly skilled exponents with many years of training, competing and security work. There was never any quarter asked for and none given! All excellent martial artists, excellent fighters and excellent men. By contrast, you can enter an MMA, boxing or kickboxing fight after specialised training often with only a matter of weeks experience. Take nothing away from them, they are tough, courageous people but they still very much the beginner.

And how quickly we forget that kickboxing also evolved from martial arts. In fact the stalwarts of modern kickboxing such as Bill Wallace, Joe Lewis and Benny the Jet where all traditional Karate stylists before pioneering kickboxing.

MMA is a by-product of martial arts so lets not forget where it has come from. There is no doubt that the MMA (UFC) exponents fight in a realm that is the closest to reality (compared to other forms of martial competition, boxing, etc.). They are hardened athletes and trained to hit and hurt. To the untrained eye and person with limited experience in martial arts they would appear to be the best martial arts has to offer. But thankfully, the only similarity MMA/UFC has to real martial arts is some of the techniques look similar as do the hand techniques look familiar to boxing. Other than that, the word martial art has no place in such an arena, as martial arts should have a depth to it that takes the exponent way further than the physical.  The need to fight and prove oneself is just one of the many skins that the martial artist sheds on the way to the true understanding of what the training is for.

Self-realisation through confrontation of self, your toughest adversary. Most martial artists only ever get as far as fighting and learning to defend their physical body. They then retire when they get tired and quit like any other sportsman. Very few actually move past the physical and attempt to gain mastery of self.

The style does not make the man, the man makes the style. There are great and not so great fighters in all areas of combat. Which style is best…? It really comes down to the person and their ability to tap into their killer instinct. A Scottish man I worked with many years ago rolled onto central station with a tummy full of beer and was set upon by 5 thugs. He turned and fought with every ounce of power he had, and put 3 of them in hospital. It was the first fight he was ever in and had never had a days training in fighting. I worked one night on the door with a new doorman who was an expert in Ninjutsu. Full of bravado and stories of his latest fighting conquests. A bit of a push and shove on the door escalated very quickly and the last I saw of the Ninja was him coping a forearm to the side of the head because he did not even know the basics of fighting…keep your hands up. So there are no hard and fast rules….The ability to fight is innate to us all, but to what extent are we going to be pushed before we lash out is totally up to the individual and their own personal evolution.