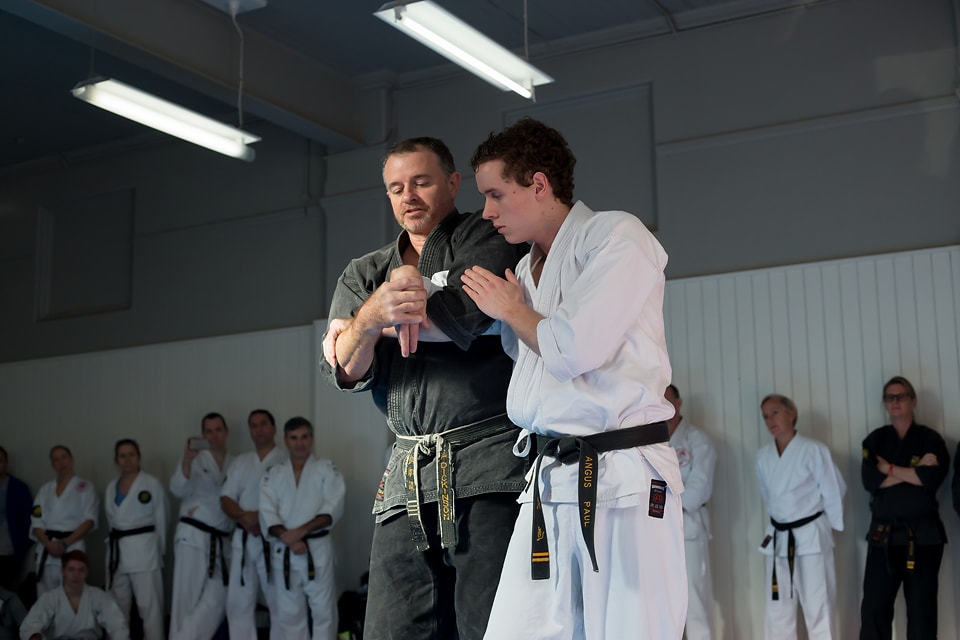 I had an interesting experience at the Black Belt grading last Sunday. As the board breaking was finishing I walked out of the dojo intending to pick up a some more boards for the last couple of breaks. As I walked out of the side entrance I was immediately confronted with a very large, very confused man. He came directly into my space and was talking, almost yelling at me that he wanted to see me outside the front of the building. So, the best thing for me to do was to go with him and remove the situation away from the dojo and students.

A couple of things were going through my head. Firstly, everyone was waiting for me in the dojo to re commence the grading, and at the same time, how was I going to bring this huge man down if he was to assault me. Straight away I called upon all the experience I gained working as a bouncer and door man. Though it was many years ago, I have refined the bouncer experience with mindful awareness training that has worked in conjunction with being a martial arts teacher. So, I was able to be calm yet on high alert, aware that any aggression from me could easily and quickly escalate the situation.

He ranted and raved on about finding a real master and showed me some of his kung fu stances that he had learned from his last master. He said that he now only answers to a higher authority. The entire time he was talking to me, I was positioning myself mentally and physically for this situation to take a turn for the worst whilst at the same time being polite and respectfully listening.

The thing that made this dangerous was his erratic behaviour. At the same time as appearing very aggressive he would quickly change and be very respectful. This is where the years of training and being present and aware in the dojo whilst training come into play. I am convinced that the physical training coupled with the fine attention we give to awareness training go hand in hand in being able to deal with exactly what is needed with the appropriate amount of force. Starting with a peaceful outcome and always choosing stillness and non-violence as a starting point.

This strange man literally talked himself to a standstill as I gave him no traction to grip onto. So, he did a strange thing. He took my hand and kissed it and then went on his way. I washed my hand, grabbed the spare boards and resumed the grading. A great outcome.

All ways be calm and still in any confrontation. There is no need to say anything. Just wait.

Share on TwitterShare on FacebookShare on PinterestShare on LinkedIn
Post Views: 490
Posted in Adults self defence, martial arts in Balmain, Martial arts philosophy