But you can’t learn Ju Jitsu on the internet. 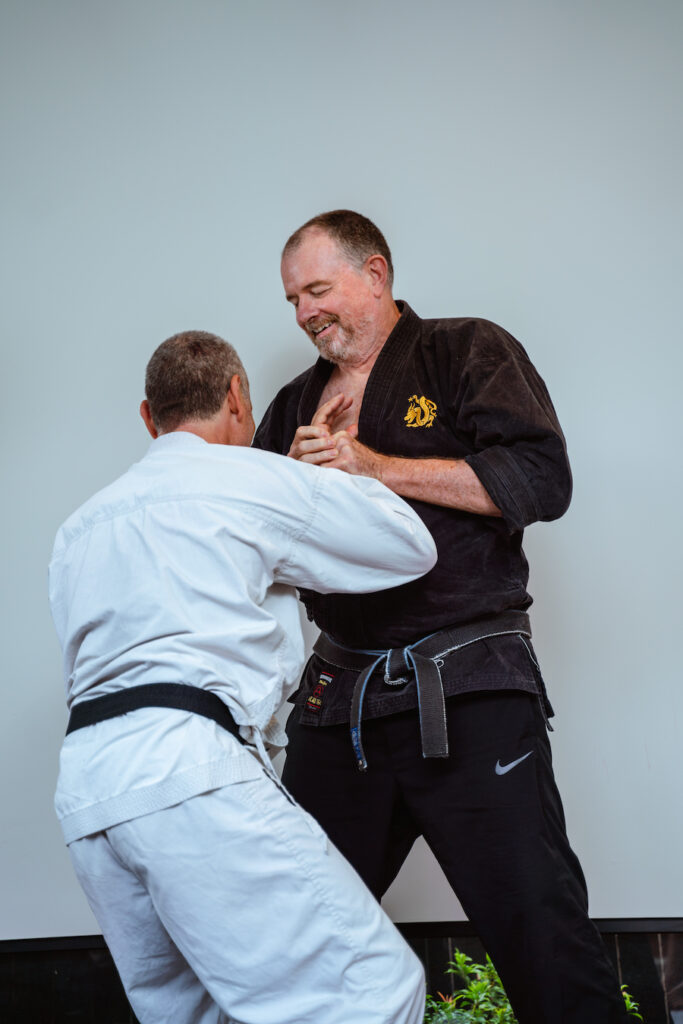 Learning just about anything online has been around for years. Now is the time to act. Why should martial arts be so different? Since Taebo swept the world with Taebo educational DVD’s, and now the myriad of yoga, meditation  and Pilates studios now teaching online. This is nothing new for me. I first offered an online education video 11 years ago; It has since been downloaded 2,325,325 times with 9200 likes. Watch now

I am now pioneering a :learn Ju jitsu online studio. This is not a way to get rich quick or a cheap exploitation of the martial arts. How can it be. In fact, just think about it. When I was running my physical dojo, the minimum signup membership fee was $100 and training fees $70 per month for 1 class per week.

To learn this incredible form of Ju jitsu in your own premises, in your own time, unlimited access, having live mentor sessions with myself, the founder of the system whenever you need, all for $15.99 for my Jujitsuanytime.com and $19.99 AUD for my Mastery Academy, there are no contracts and you can cancel anytime. And the kicker is you can try it, no obligation for 2 weeks for free. Now, other than doing the course for you it does not get any more risk free and accessible than that,

But how do you learn without a partner.

You cannot rely on having a partner at any time. All systems need to rely on their own resources. When I started to learn Daito Ryu Aiki Jujutsu in Japan, probably the most famous of the traditional Ju Jutsu schools, back in 1988, more than 30 years ago, you learned all the basic kata without a partner, yes that’s right, it was all done alone. I used to then practise in parks, under bridges and in gyms, when ever I could between formal classes. I liken it to shadow boxing/kicking, whereby, with the use of kicking and punching drills and a little imagination you train. This is a tried and tested method of training, that has been around for many, many years.

We are not against training with a partner in any way, in fact we encourage it. I have designed a system that has been taught to thousands of students for many years, that is robust and will challenge you, whereby initially you do not need a partner. We just do not make it a deal breaker in your training as we work together to overcome any barriers and limitations. After all, isn’t that what martial arts is all about. Working closely with a master without sacrificing your form or integrity, to overcome anything that gets in the way of achieving your goals.

But learning online is so much easier than doing it in a physical group class.

I do not just give the belts away. Each belt level has a comprehensive training program that  must be followed, there are no short cuts. In fact, learning from home is so much harder as you don’t have the motivation and energy of your fellow students. You have to be self-motivated and really want to do it. It is in no way and has never been a fast track or a short cut to a black belt. In fact, the blackbelt test is the same and has been for years.

But what are your qualifications?

Just take a look at this link. 40 years of experience.

But Japanese Ju Jitsu is all about locks and take downs,

Read  my blog post on Ju Jitsu V’s Judo. It is a real eye opener into exactly what Ju Jitsu is.

You have spelt Ju Jitsu the wrong way.

Why the different ways to spell Ju Jutsu?

This can be confusing but they all mean the same thing. The word Ju Jutsu is translated from the Chinese characters that are used in the Japanese language. Ju can be translated to mean; tender, weakness, gentleness, softness and Jutsu to mean; art, technique, skill, means or resources. In the translation there are different interpretations. I tend to use the one that is the easiest to say; Ju Jitsu. The more traditional translation is Ju Jutsu. You will see that I rotate between Ju Jitsu and Ju Jutsu. This does not in any way suggest 2 different forms of martial arts.